I'll admit it. With all sorts of people sporting MacBooks lately, I've been suffering from a distinct lack of cool - call it Mac envy. Not that I particularly want to use a Mac, mind you - I don't think I would switch unless Windows Vista is forced on me. I simply prefer to avoid learning curves when I have a working and playing environment that is effective, efficient, and has been finely tuned over many years. Besides that, I love my sleek ThinkPad - the best engineered computer I have ever owned.

But the look of OSX is cool. What I really think I have is a case of dock envy. (That's dock envy, with an "o.") So I decided to trick out my Windows XP desktop and program launch capabilities.

Two great products, both free, and a bit of taskbar tweaking was all it took. For ease of launching, I took Lifehacker's advice and installed Launchy. It's a keyboard launcher that allows you to type the first few characters of a program or file path and, as if by magic, it figures out what you want. Any ambiguity is resolvable via a dynamically constructed drop-down menu. Hit enter and away you go.

For the cool dock effect, I installed Rocketdock, which I absolutely love. Rocketdock not only provides a Mac-like dock, it also supports small dockable applications known as docklets that are written for the non-free ObjectDock. I then picked up a bunch of cool icons and a couple of docklets from Wincustomize, and I have all the cool functionality that I want.

To complete the aesthetic, I chose the "hide the taskbar" option on Taskbar Properties, and used a great photo of fireworks over Tokyo, taken by my son, David, during his trip to Japan this summer. Here's the result: 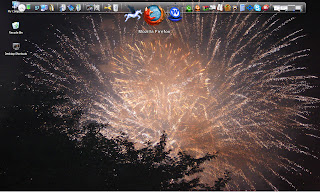 All the cool without the learning curve! Perfect.