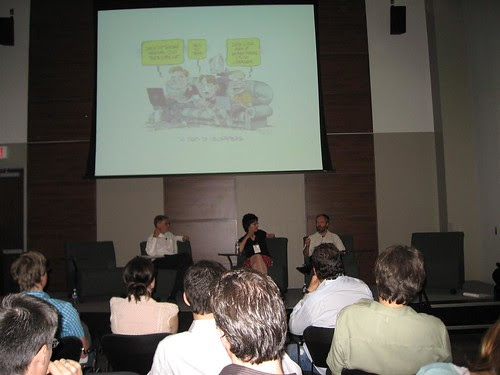 I really enjoyed myself at the mesh conference over the last two days. I found the sessions themselves to be a little on the light side compared to the world in which I’m used to playing, especially on the first day. On the other hand, the overwhelmingly positive feedback that I received for the session I did with Nora Young and Mark Schneider suggested that the audience is craving some sessions that are a little more deep and thought-provoking. The second day opening keynote conversations with Richard Edelman (Edelman) and Jim Buckmaster (Craigslist) demonstrated that people who offer a different and thoughtful perspective on what’s going on (that is, other than the typical and obvious-to-all Web 2.0 hype) will command this audience’s attention. (And, much to my delight, I found out that Craigslist is very much a valence organization).

I wish I had a recording of the session in which I participated. The theme was about media consumption, essentially asking the question about whether people today “graze” rather than dive deeply into the various media, and what this means for all sorts of different aspects of society. But we quickly moved on to the history of knowledge, authority and societal shifts (after all, I was on the panel :), collaborative production of media and culture, immersive, participatory entertainment (of which NBC’s Heroes is a great example of how a traditional consumptive medium is attempting to break out of its conventional hypnotic, hot medium, mode), and a bunch of other stuff that kept the packed room engaged for over the allotted hour.

The best part of the conference for me was undoubtedly the conversations – the “meshing” – that took place. Not only did I have the opportunity to catch up with friends that I hadn’t seen for quite a while. I also had many engaging encounters with all sorts of interesting people across a wide array of topics. Particularly gratifying was the interest in my research and thesis work. Among new, would-be entrepreneurs and long-experienced and successful business people, A Valence Theory of Organization seemed to resonate well and just make sense, especially to those who are embodying and experiencing the importance of human networks to successful businesses today. For those with whom I did not have the opportunity to engage, and for others who might want a quick recap of my thesis pitch, here it is:

I make the observation that almost all organizations that we have in our world – be they business corporations, non-profits, volunteer organizations, sewing circles, soccer clubs, schools, religious organizations – they all look like factories. By this I mean that they are Bureaucratic, Administratively controlled and Hierarchical – in other words, BAH! I suggest that this is not because it is human nature to be BAH, but rather this is an artefact of the Industrial Age that was mechanistic (with roots in the Gutenberg Press), industrial, fragmented, and functionally oriented. Now, as I look around, I observe that we are no longer in the Industrial Age. Rather, we are living in a world in which everyone is, or soon will be, connected to everyone else – an age of ubiquitous connectivity. This brings about the effect of being immediately next to, or proximate to, everyone else – in other words, pervasive proximity. I therefore ask the question, what form of organization is consistent with the ubiquitously connected and pervasively proximate world of today, rather than with the 19th century?

My answer draws from a metaphor of the Bohr model of the atom, and especially the valence or connection level of electrons that are shared by a molecule when two or more atoms come together. I identify several specific forms of valence relationships that are enacted by two or more people when they come together to do almost anything; these are economic, social-psychological, identity, knowledge, and ecological. An organization is thus defined as that complex, emergent entity which occurs when two or more people, or two or more organizations, or both, share multiple valences at various strengths, with various pervasiveness, among the component elements. Using this as a definition of organization has profoundly disruptive implications for every aspect of management, governance, and engagement that we have come to know over the last hundred or so years. This vocabulary of Valence Theory (and its associated Theory of Effects) has the elegant appeal (among others) of being able to explain and account for all of our traditional organizations, as well as all the funky sorts of organizations that have appeared over the past decade.

To Rob, who invited me to participate, and to Stewart, Matthew, Mark, and Mike – thanks for a great time!

It was a real pleasure Mark - many thanks for joining us