There's a restaurant site near OISE that has repeatedly gone out of business through several owners over the past couple of years. I liked its last incarnation, especially for its decor, cool music, and cheap prix fixe oriental lunch. Too cheap, perhaps. Alas, the standard eviction notice, prominently labelled "Notice to Tenant" has been an all too common, periodic adornment to the premises.

The windows had been covered up and it appeared as if something was happening inside (the last time was a movie shoot), but once again, a Notice to Tenant letter was posted on the window this morning. But this one was different. 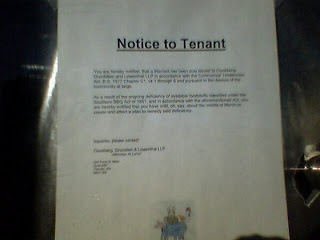 The text reads as follows: You are hereby notified that a Warrant has been duly executed to Cluckberg, Chuckleton and Lowenthal LLP in accordance with the Commercial Tendencies Act B.S. 1977 Chapter C1 vs 1 through 6 and pursuant to the desires of the community at large.

As a result of the ongoing deficiency of available foodstuffs classified under the Southern BBQ Act of 1857 , and in accordance with the aforementioned Act, you are hereby notified that you have until, oh, say, about the middle of March to cause and effect a plan to remedy said deficiency.

I'm not sure whether it was the Southern BBQ Act or the "oh, say, about the middle of March" that clued me in. The footer says, "Made you look." A cute reversal used as a probe of the now clichéd Notice.
[Technorati tags: marketing | reversal | cliche probe | cliche probe]
Posted by Mark Federman at 10:37

Email ThisBlogThis!Share to TwitterShare to FacebookShare to Pinterest
Categories: Leadership and Managing Organizations, Management and Applied McLuhan for Managers