Today is my daughter's birthday (Happy Birthday, sweetie!) and we decided to make a quick trip to New York City last week as a pre-birthday present. She wanted the opportunity to explore Chinatown, SoHo and other parts of lower Manhattan (and in particular, the bargains!) so we thought that some shopping and a show over a couple of days would make for a nice getaway. While we were there, we took her through the Lower East Side, once the centre of Jewish immigrants to New York, and pretty much the only place to find a bargain. Thirty years ago, we made the pilgrimage to the Lower East Side for linens, kitchen appliances (models that were then only available to the trade could be had on Grand Street), electronics and photography equipment - not to mention fashions, leather goods, hats, shoes... you name it! Alas, the Lower East Side of yesteryear is no longer. Chinatown has expanded northward and eastward from Canal Street up to Delancey, and only remnants of Jewish landmarks and artefacts remain - what was once most likely Epstein's Deli is now Epstein's Bar on Allen Street. 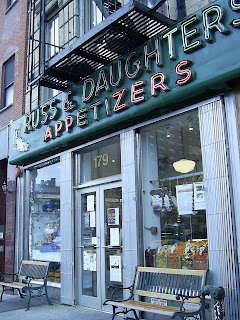 The other reason we wanted to take the walk from our hotel in Chinatown up to East Houston between Allen and Orchard was to visit a particular deli that specializes in various types of smoked fishes, herrings and the like, and is renowned for its caviars. I'm speaking of Russ and Daughters Appetizers, the proprietor of which is a fellow named Mark Federman. That's right. Whenever I do a Google search on my own name I have inevitably shared the first page of hits with "the other" Mark Federman who is the third generation of the Russ family (Russ on his mother's side) who has run what has become an institution on the Lower East Side since 1914. 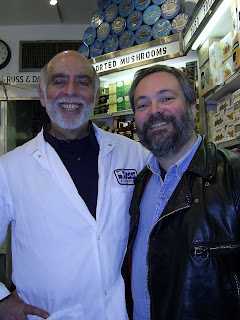 We entered the store and first met Mark's daughter Niki who, with her cousin Joshua, is now taking over the day-to-day business. Apparently, my namesake now keeps "banker's hours." When we finally met her father later in the day, he greeted me with, "so YOU'RE the strategic thinker!" It seems that Google-searching one's name works both ways. Is there a physical likeness? Neither of us knows whether we are actually related. One thing for sure, though - his bord is alterer than mine!
[Technorati tags: mark federman | russ and daughters | lower east side]
Posted by Mark Federman at 18:46