Not to rattle my own tail on this, but the hype around the Samuel L. Jackson horror thriller, Snakes on a Plane, seems to have been (finally) defanged. The Globe reports that

Hollywood ... tried to parse why the unprecedented hype surrounding the comic thriller Snakes on a Plane failed to jump from the Internet into the real world, leaving the studio New Line Cinema with only $13.8-million (U.S.) from weekend screenings. With an additional $1.4-million from late-night shows last Thursday, Snakes took in enough to win first place in the weekend's box-office race, but the tally was 50 per cent less than some forecasts.

As it turns out, a week before the movie opened, the Star interviewed me, and I explained it this way:

"It's turned it into a cliché or phrase that had meaning among only those in the know; it became like the secret password of a club," says Mark Federman, an Internet and new media researcher with the University of Toronto. "I think seeing the film is quite irrelevant; it becomes more an act of participation rather than going to see a film."

It seems that, among the reversals we seem to be experiencing in the UCaPP age is perhaps the reversal of the effect of hype - the more something is overtly promoted, as was this SoaP opera, the less people will succumb to the promotion. 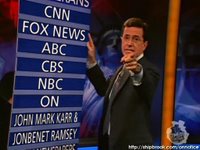 CNN and others - you're on notice!
[Technorati tags: snakes on a plane | soap | hype]
Posted by Mark Federman at 07:30

Email ThisBlogThis!Share to TwitterShare to FacebookShare to Pinterest
Categories: McLuhan Media and Culture