The artist is always engaged in writing a detailed history of the future because he is the only person aware of the nature of the present.

These are two, among very many, comments by Marshall McLuhan on artists, and their role in our modern society. Lilly Koltun, Director of the new Portraiture Gallery of Canada, brought her thinking about McLuhan thinking to bear on the artist, and in particular, the portrait artist. According to Koltun, artists and creators are the way to protect ourselves against the effects of technological change through the awareness that art-as-probe creates. McLuhan made particular note of the visual artists who were probing the conditions of his time in the 1950s and 1960s. Are we, today, experiencing analogous conditions that necessitate the unique insight that artists can provide?

As McLuhan likened ubiquitous communication to an externalization of our central nervous system, the experience of abstract art likewise connects to the multi-sensory pathways of a culture’s CNS. In this way, the patterns that emerge reveal the hidden ground (in McLuhan’s terms) that reveal the actual dynamics of a culture. 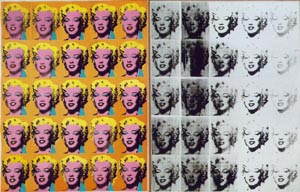 As McLuhan states in Understanding Media, the content of one medium is another medium. In this famous lithograph, the obvious image (figure) is Marilyn Monroe, but the work as a whole is not. Rather, its ground, and hence meaning, concerns the medium of making, selling, and commodifying celebrity.

Unlike traditional one-point perspective, Dali does not position Mae West in space, but effects a reversal, positioning space in Mae West. As we know from Laws of Media, the act of accelerating perspective beyond the limit of its potential, as is regularly done by surrealist artists, throws perspective into reversal, thereby revealing the structure, process and action/interaction of the medium, rather than its content. Indeed it is the characteristic repositioning, or juxtapositioning, of surrealism that probes reality. Little wonder that the newspapers of McLuhan's day, a medium that is entirely based on juxtaposition, was so effective in probing reality. Newspaper becomes surrealist art. [The obvious question, of course arises: Taking newspaper as surrealist art as ground, what becomes newly revealed about the world about which it reports?]

Abstract art creates the simultaneous effect of image, performance, collaboration (between a minimum of artist and view, if not among more participants), reflexivity and juxtaposition. Little wonder that McLuhan uses it as the definitive example of a cool medium - one that necessitates participation and completion by the user/viewer. True abstract art creates an anti-environment that probes the ground-rules of both art and society.

Consider portraiture. Today's abstract portraiture can comprise performance, as in the case of Istvan Kantor.

The portrait can be performed only once; any artefact that results is not the portrait. The artefact proper is itself ephemeral [.pdf].

Whereas photography once used its properties of physicality (i.e. its chemistry) to leave a "trace" that directly links to its subject matter, digitization and computer technology challenges photography's indexicality via the possibility of manipulation. But simultaneously, it introduces new possibilities for creation, via live and interactive portraits that changes the medium of portraiture into performance and participation. Portraits experience a reversal under the extreme acceleration of electric conditions, and change from a static state to dynamic.

Indeed portraits as a probe of time has changed over the ages. When portraits were painted, they captured the image of the "sitter" to be preserved for eternity. Photography introduced a reversal, where the image of the "sitter" was a way of preserving moments in time. Now, with digital photography and photo-manipulation, portraiture becomes a probe of multiple possibilities, ambiguity of the times, and the ambivalent relationships among both sitter and portrait artist, and their grounds.

Thus, the artist's job is to dislocate the old media through their art to reveal the ground effects of the new media. McLuhan's observations are as relevant now as they were forty years ago: The artist is the person in any field, scientific or humanistic, who grasps the implications of his actions and of new knowledge in his own time. S/he is the person of integral awareness."
Posted by Mark Federman at 23:51

What a great piece.

Glad i found it.