[Review] "No Journey's End": A Wild Ride, and a Wild Read 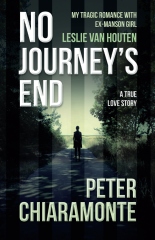 No Journey’s End, a new, “creative nonfiction” book by PeterChiaramonte, should best be enjoyed with a background soundtrack of Steppenwolf’s classic, rock & roll anthem, “Born to be Wild.” Chiaramonte takes us on a ride that perpetually seems to be heading over an existential cliff as he recounts how his life-path intersected for a time with that of a convicted member of Charles Manson’s murderous “family,” Leslie Van Houten. We follow the journey of Chiaramonte as an aspiring but rebellious academic who chafes against the reins of the traditional academy that leads him from an uninspiring job in a suburb of Toronto to the psychedelic adventure that was Southern California in the early 1970s. After seeing newspaper pictures of the then young-and-beautiful Leslie Van Houten, he is compelled by an irresistible drive to pursue, woo, and win the heart of a woman whom we know is ultimately doomed. The author portrays Van Houten as a naif, caught up through little fault of her own in Manson’s vengeance project driven by the sex-and-drugs-enabled mind control of his followers. Throughout the hard-driving narrative, a variety of characters from both Van Houten’s and Chiaramonte’s lives act as crash barriers for the tragic couple careening towards the inevitable end. It is no spoiler that would threaten the sheer roller-coaster enjoyment of the read to note that Chiaramonte managed to veer safely to a life-long academic career, while Van Houten has spent nearly her entire life in the maw of the US penal system.

Given Chiaramonte’s credentials, it is not surprising that this book can be read as a philosophical and existential reflection on one person’s inexorable attraction to impending disaster. The narrative is filled with drugs and rock-and-roll that typified the times (although notably, very little sex). It is also filled with fast cars and the vicarious horrors that were the crime scenes, both physically in the LaBianca and Tate/Polanski homes, and in the psyches of the drug-deranged family members. During the prison visit scenes, in which the author speaks with the object of his desire through bullet-proof glass, one gets the impression that he is actually looking himself in a Narcissus-inspired mirror. Zeus, it is humorously said, advised Narcissus to “watch yourself.” Chiaramonte is given the same advice throughout the book by various and sundry actors that populate both his and Van Houten’s lives. As the reader vicariously races through the hell of the Manson experience in the author’s “shotgun seat,” often watching the blur of scenery through spread fingers of hands over eyes, one realizes that among many other things, No Journey’s End is a cautionary tale that retrieves the ancient trope, there but for the grace of God go I. Chiaramonte does a masterful job reflecting on what might – but could never – have been, looking for adventure, taking the world in a love embrace, and exploding into space.